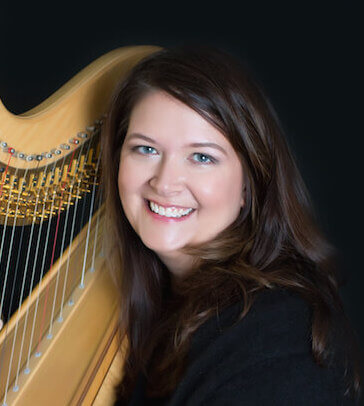 Her rich and varied orchestral experience has given her the opportunity to perform with the Baltimore Symphony, Washington National Opera, Fairfax Symphony, Alexandria Symphony, Maryland Symphony, the National Philharmonic, the Connie Francis Touring Band, the Kennedy Center Opera House Orchestra, The Royal Ballet, the Marininsky Ballet, US Air Force Band and the American Pops Festival Orchestra and the National Orchestral Institute.

In 2016 she had the distinct honor to play for Pope Francis’ Historic visit to the United States.

She had the distinct honor to be selected as the featured solo harpist for the 55th Presidential Inauguration and is well versed in official event protocol and has had the honor to play for every living president.  She enjoys performing at various landmarks and programs throughout Washington.  She has played on the State Department Recital Series, the Southwest Chamber Players, the Kennedy Center’s Millennium Stage, and events at the US Capitol, US Supreme Court and the Carnegie Institute of Sciences, The Smithsonian, National Basilica, and The Library of Congress.

Recent performances include the dedication of Legacy Memorial Park for the DC Commission on the Arts, and the Horatio Algers Awards.

Melissa has been heard on NPR Morning Edition, and performances have been televised internationally, as well as locally.

Melissa has over 25 years experience in performing on the harp,and tastes that run from Bach to Broadway to Beatles to current pop.  Her repertoire is expansive, and she enjoys arranging current pop favorites for the harp.

Melissa is an avid educator and maintains a private studio of about 20 young harpists.  She is a certified Suzuki Harp Instructor, which focuses on starting children as young as 3 on the harp.  She is currently on the faculty of The Levine School of Music and she has held faculty positions as harp instructor at Salisbury University, Howard University, and the Holton Arms School.

In 2011 Melissa released her CD entitled Lullabies for Lily.

Melissa holds Bachelor and Master of Music degrees in Harp Performance from the Peabody Conservatory of Music, and completed additional studies at the Salzedo Summer Harp Colony.  Her primary teachers were the late Jeanne Chalifoux and the late Alice Chalifoux.

She currently resides in Falls Church, VA, with her husband John, and their 2 young children.