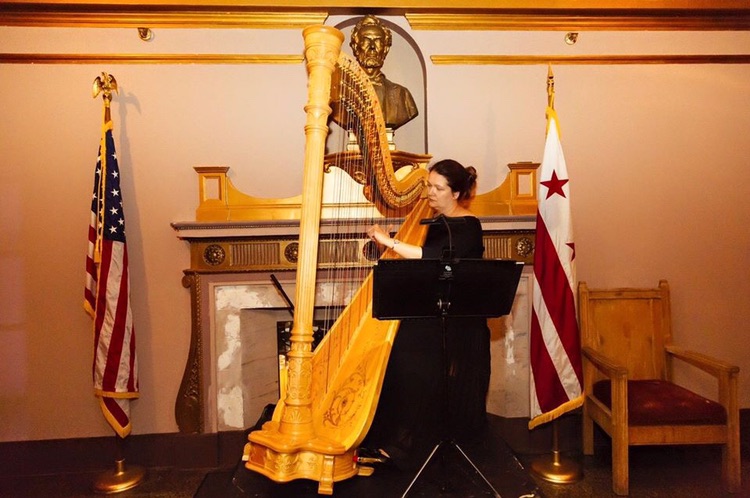 Whether it's an opulent affair or an informal gathering, the harp provides a distinct and memorable musical backdrop that adds elegance to any event.

Recent events include the 55th Presidential Inauguration, The DC Mayor’s Awards Gala for the DC Commission of Arts and Humanities at Lincoln Theater, the Ireland American Fund Annual Gala at the National Building Museum, the Horatio Alger Awards Program at the Mellon Auditorium, the Marshall Legacy Gala, the Saint Luke Institute Gala at the Vatican Embassy, dinners for the Meridian Ball and receptions at the State Department, the Russian Embassy, the French Embassy, the UAE Embassy, the Willard Hotel and the Ritz Carlton. Available repertoire includes an expansive range of music that can be tailored for your event. Selections include Classical, Romantic, Baroque, Jazz Standards, Classic Pop, Current Pop, New Age, Folk, Holiday, and Celtic.

It wouldn't be Christmas without you, your harp, and your music.

With love and gratitude,

You were great. I got sooo many compliments about you

as people were checking out. Merry Christmas and I'll see you next year!

Your exceptional talent and beautiful musical selections made our formal
event truly spectacular!

Thank you very much for making yourself available to us on May 1st, and we sincerely hope you will come back and play for us next year. Please let me know if ever I can provide a glowing recommendation for you.

you always play beautifully and really set the mood for people to get excited for the holidays!

You can view Melissa's calendar to determine if she's available on your date, or contact her directly with questions.

Please use the contact form to request a quote for your event.